Costumes and Wearables as Game Controllers at TEI 2015 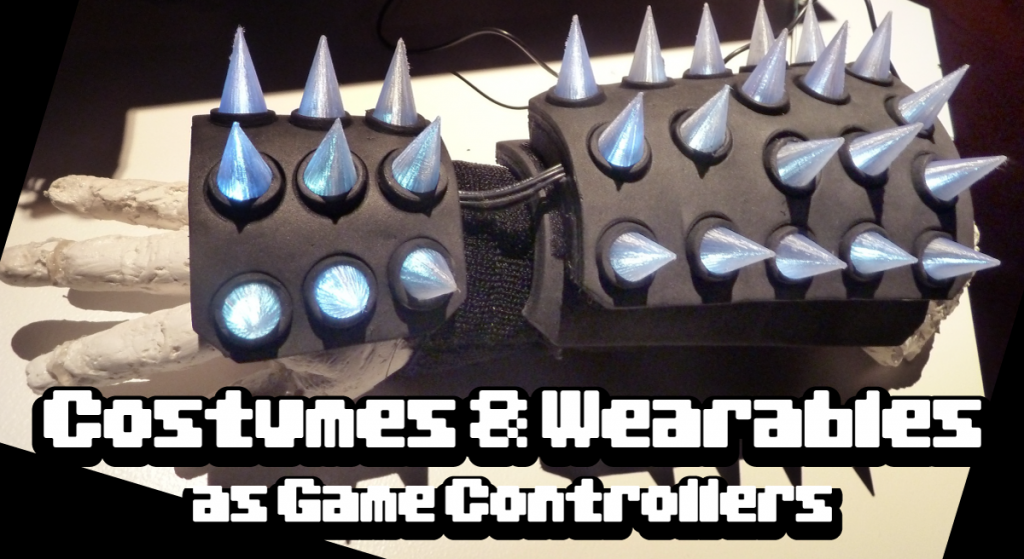 We are excited to be organizing a studio on Costumes and Wearables as Game Controllers at TEI 2015.  For more information, please visit the official studio website.

Taking inspiration from theatrical costuming and fashion design, this studio will enable participants to create wearable game controllers that include costuming elements.  In theatrical and dance practice, costumes and masks are frequently used to elicit specific character behaviors in performers.  Improvisational theater theorist and Mask practitioner Keith Johnstone describes masks as a source of outside->in transformation. Stanslavski, the father of Method acting, wrote about the power of masks and makeup to elicit powerful new experiences of the self. Schools of outside->in method acting have long held that it is possible to use external stimuli including costumes, choreography, and tangible props to elicit transformative experiences in a performer.

Fashion aficionados similarly use the clothing they select to inhabit an identity and to project that identity in social contexts and interactions with others. What takes place in a bounded ‘magic circle’ of gameplay with costuming, we believe also has relevance outside this sphere and in the realm of everyday life. We can see the beginnings of the modulation of wearables into fashion with experiments like Google’s collaboration with Diane von Furstenberg putting Glass on runway models. This studio will allow participants to reflect upon the transformation of wearables into fashion objects in their own right, toward anticipating and designing these aspects of such devices.

The studio organizers will assemble a simple kit for quickly hacking together wearable game controllers, so that participants can focus on the expressive possibilities of designing new wearable game interfaces.  We will put together a very simple hardware platform comprised of conductive fabric, alligator clips, and the MaKey MaKey interface board, which we will provide to teams of participants to facilitate rapid prototyping of wearable controllers.  For more advanced and ambitious participants, we will also provide an assortment of Arduinos, accelerometers, flex sensors, and other off the shelf sensors.  Participants are encouraged to source and supply their own specialized hardware if they desire to work with any particularly esoteric sensors or devices.

In addition to providing an easy-to-use hardware prototyping platform, we will also provide a wide assortment of clothing, costume pieces, and accessories for participants to modify and transform into wearable game controllers.  Participants are also invited to bring any costume or prop items that they would like to contribute to the shared group pool, so long as they understand that these items may well be modified and re-appropriated during the studio.

Prior to the start of the studio, the organizers will curate a selection of free-to-play online games that we believe will lend themselves to this type of expressive interface design.  A list of these games will be provided to the participants prior to their arrival at the conference, to help them plan possible new interactions ahead of time, but participants are also encouraged to suggest and provide other games that they are interested in designing new interfaces for.